Went for an early morning walk to an “attraction” nearby called, ‘Staircase to the Moon Lookout’. It was quite a nice view but as it was billed as one of Port Hedland’s tourist hotspots I felt the day would definitely be better spent getting closer to Broome.

The caravan park was an outrageous $42 for a pretty average powered site but looking at the washing lines I suspect they can charge so much because the accommodation is sought after by the local workers (FIFO?) – the washing lines were 50% boiler suits and hi-vis shirts. Anyway, I wrote that money off. 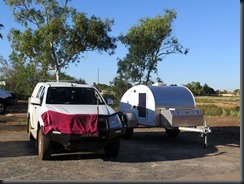 One thing I must say about Port Hedland; industry is busy – from the caravan park in the distance you could see the railway line to the port. Every few minutes an incredibly long train arrived with full wagons of ore while on another line even longer trains were being made up of empty wagons presumably to return to the mines. I mentioned the road trains I encountered yesterday I overtook about a dozen but they were only travelling 10kph slower than me so presumably there were ore carrying road trains every few minutes along the road. The airport had several commercial jets in and out morning and evening.

People have to be doing something they are not on the street, when was in the town centre yesterday (Friday) you could have fired a cannon down the main street with no fear of hurting anybody.

Back to today’s journey:

The first part of the trip was shared with many road trains but they thinned out after the Marble Bar turn off. I was tempted to visit Marble Bar but a nearly 400km round side trip seemed a bit excessive. I am planning to do a similar journey through WA in the future but staying away from the coast to take in Mt Magnet, Newman and Marble Bar so it can wait.

The scenery varied from rugged low hills to flat scrub.

As I type this in the late afternoon I am surrounded by poultry, there are chickens, geese and a large number of peacocks and peahens of various ages. In the paddock next to the caravan park part of the roadhouse is a Brahman bull and a camel. 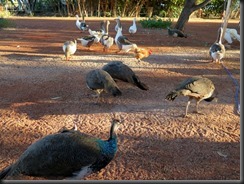 I was amazed that the powered site at the roadhouse was only $20 (they make it up by charging $1.59 a litre for diesel). Anyway, time for a beer or two after another day of perfect weather – I hope Queensland sorts its weather out before I get there.