This page is a brief run down on the power and lighting available in my car and teardrop camper and where and how it was fitted. As it currently stands the combination of the two can run without external power for at least a day though for how long has not been thoroughly tested. The weakest (as I see it) is the 60Ah battery in the camper together with it’s associated solar panel.

The only power on the camper when I bought it was a 60Ah battery charged by a 10watt solar panel mounted on the box at the front of the trailer. This battery supplied LED lighting in the cabin and kitchen as well as a two socket 12v outlet in the cabin.

The battery has been replaced with 100Ah and a better controller

This supply was more than adequate for lighting and recharging phones etc but it could never provide enough power for something like a fridge.

I have made some minor modifications to this power. I changed the two socket outlet in the cabin for a four outlet one, added a voltmeter and replaced the 10 watt solar panel with a 40 watt one.

While replacing the solar panel I also added an Anderson plug in parallel so an external solar panel could be connected if desired. (See “Parking Power”)

It is possible to run the TV in the cabin off this 12 volt supply but only for about 6 to 7 hours – The TV and HDD can both run directly on 12 volts and together they use approximately 50 watts (4 amps). Other than a short test run this has not been tried in practice so far. I believe that using only the lights and USB charging the battery would last indefinitely with only modest sunlight during the day but I don’t know how it would recover if it powered the TV and HDD every night.

Aux Battery in the Car

I mentioned earlier that it was not practical to run a fridge from the 60Ah battery so I decided to install an auxiliary battery in the tray of the car. I chose a 120Ah AGM deep cycle battery and a Projecta charge controller. 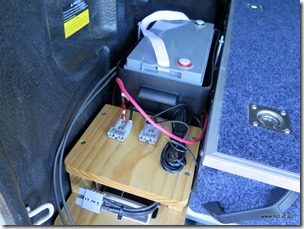 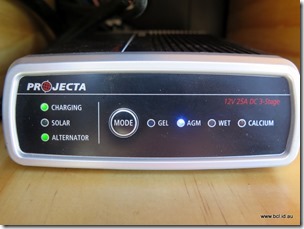 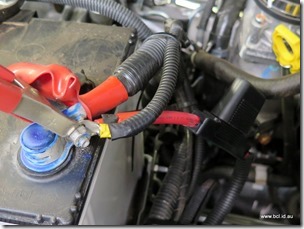 A cable was run from the existing car battery to the Projecta controller so that the battery would be charged as the engine was run but the controller also prevented the car battery being drained by anything connected to the auxiliary battery.

BTW I bought the battery, battery box and controller as a very reasonable deal. I was not that pleased with the battery box as it had no fuse protection at all (it has now).

I purchased a 50 litre fridge/freezer to carry on the back of car which could be powered from the mains or the aux battery. This made a tremendous difference to travelling – it was great!

When I wired up the charge controller I made provision for the addition of a solar panel at a later date. Originally I thought I would have portable panels but I found it was possible to mount a 100 watt panel on the roof of the Ute tray while still leaving the roof bars useable (with care) for those rare occasions when I carried something on them.

Since fitting the solar panels I have run the fridge on the aux battery continuously without ever connecting to mains power. The battery remained fully charged with some driving or solar input.

According to my calculations the aux battery should run the fridge for about 55 hrs or 2.5 days without charging. In reality it is unlikely I would not use the car for that long nor would it be in shade when the fridge is in use.

When I fitted the solar panel I also added a 200 watt pure sine wave inverter so I could charge laptops or any small device not compatible with 12 volt or USB charging. At the time of writing I have not used it.

When I bought the Teardrop it had no provision for mains power at all, it was offered but I could not or didn’t want to afford it. It was fitted later.

All I wanted initially was a power point in the cabin and one in the kitchen. 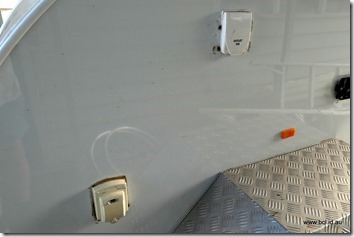 When the camper is in the car port or the car is in the garage neither of the solar panels get any sunlight and my car can go for over a week without being used (I prefer to walk locally).

I have fitted external Anderson plugs to both so that a couple of small 40 watt solar panels resting on the roof of the car port can be plugged in to keep the batteries charged. If you look closely at the photo of the solar panel on the teardrop camper you can see the external panel is plugged into the Anderson plug.

It seems to work well. I am very happy with my current set up.

You might not be familiar with the Anderson plugs I mention. They are a connector for high current (up to 50 amps I think), low voltage power supplies. Their great advantages are that you cannot connect them the wrong way round, they are becoming something of a standard connection and cheap copies from China are plentiful on Ebay