Up early as usual for a shower at 6.30am then washed the clothes I wore yesterday; followed that up with a breakfast of cereal and coffee (ie the same as every day) before an early morning drive to the railway station (‘historic’ it said). 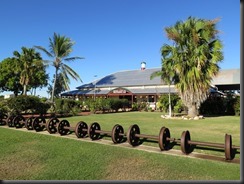 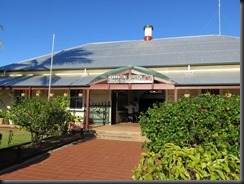 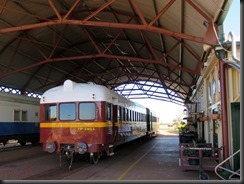 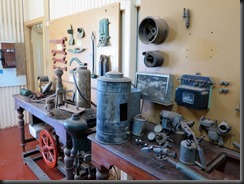 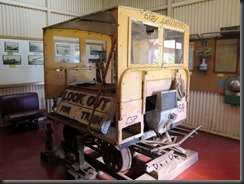 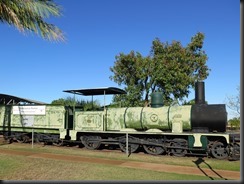 Decided to drive to Karumba (it’s only 70km on a sealed road) to see the Gulf of Carpentaria. The tourist brochure seems to imply (reading between the lines) that the only reason to go there is for fishing, boating and crabbing.

This turned out to be not far wrong; there is little there to entertain anybody not interested in those three things. There was a promising  fish and chip shop but it was a bit early to eat so I wandered about the estuary of the Norman  River and the Karumba Esplanade facing the Gulf. There were the usual warnings about not walking near the waters edge because of crocs (though a pelican floating past seemed unperturbed). The mangroves were very dense along the river banks and the estuary.

Back in Normanton I called in at the Post Office for a book of concession stamps but they don’t stock them – had to pay full price ($1) to send a postcard!! Also filled up with fuel for tomorrow and packed up my, now dry, washing. (gripping stuff eh?)

It started well at the Albion Hotel with a schooner of XXXX Gold but went downhill from there.

The Central Hotel didn’t open until 4pm(??) and at the Purple Hotel I was served a midi of beer in a plastic glass with the excuse, “The rodeo was in town”. Huuumph! 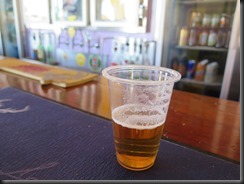 Feeling a bit peeved I walked back to the Albion Hotel for a couple more schooners and lunch but they were not serving lunch because the “Cooko was on Strike” so after a few refreshing ales went back to the caravan park for a homemade lunch – cheese sandwich, banana and tea  – not quite what I had in mind but OK. I did try the local café on the way back from the pub but they were a “Chico Roll and Chips” type of place so that was no good.

At 6pm hunger set in so I returned to the Albion Hotel for dinner and ordered rump steak, pepper sauce, wedges (chips were off) and a beer. When it arrived the steak was just about perfect so I followed it up with another beer to celebrate before returning to the caravan park.