This will be my last day in foreign parts (for this trip at least); Hebel is only about 4km from the NSW border so I will be back on home soil tomorrow. 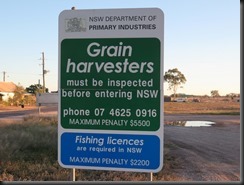 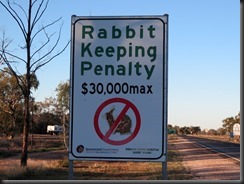 I intend to start early tomorrow and get as far south as I can, the weather is forecast to be fine for the next few days but the downside to clear skies is cold nights. Last night I had to sleep under my winter doona and it is not going to be any warmer the further south I go. it was about 7’C this morning – remember I am not near the coast.

I will get at least as far as Gilgandra but might even try for Dunedoo or Mudgee – if I get that far I could probably make home in one more day ie arrive Thursday. I have allowed two days but I think one would be better.

I have passed through Hebel on a few occasions but this is the first time I have stopped. There are only about 15 to 20 buildings; it is literally a town where if you blink you miss it – though the right angle bend in the middle of town might bring you undone if you did blink.

The pub sells fuel at $1.50/l however I have slightly under half a tank which should get me to Walgett (135km) where I expect more normal prices.

The caravan park is behind the General Store (which is for sale BTW) and $20 for a powered site. After a walk round Hebel and its “Historical Circle” I had a homemade peppersteak pie and a beer in the store for only $10 which I thought very fair. 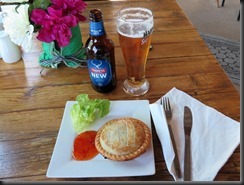 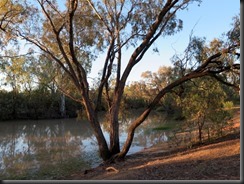 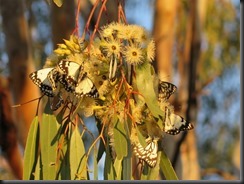 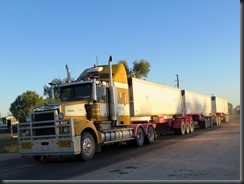 Once the sun went down went back to the General Store for a meal, not an exciting menu but a modest selection of beef, chicken and seafood meals, let’s face it the dining room has four tables so they probably don’t get a lot of custom. I ordered chicken parmigiana together with a couple of beers and it was very nice. Back to the camper to write this while listening to some music. A nice end to a nice day.

Set off relatively late (for me) this morning. Went for a walk to look at Capella especially near what I took to be a creek (well, it had a bridge for the highway). It was a dry creek with the beginnings of a community picnic area – I forgot to take a picture of that. Next to it was what I presume to be the Capella Bowling Club which had evidently hit bad times and closed. 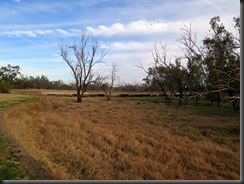 Eventually set off just after 8.30am and the drive south was uneventful, I stopped a couple of times to stretch my legs and enjoy the volcanic scenery of central Quuensland. 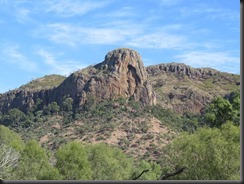 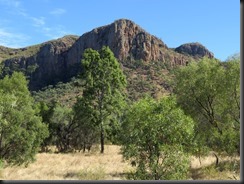 There was a section of major road works where they had thoughtfully wetted the dirt down to stop dust. Personally I would have preferred the dust, it blows away, but the wet dirt sticks! 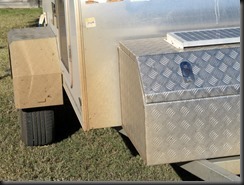 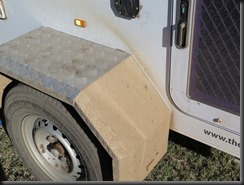 Injune is an even smaller town than Capella with a population of less than 400 but it has a caravan park abet a self service one. The servo had run out of diesel when I arrived but he said he was expecting some in the evening. I was not that worried I have plenty to get me to Roma 90km away and am carrying 20 litres in the tray.

How nice it is to stay in Injune in June. Just as the sun set I went back to the Caltex place and filled up with fuel for tomorrow. All is good.