At 9am walked to the Post Office to buy some stamps. Was surprised to see it still using the original Post Office building, far too many have been sold off and replaced with a Post Shop in the local shopping mall.

Set off in the car back to See Park but parked on the other side so we could get a better look and walk around the area. Yesterday we were on the side with a steep slope.

Even the colours of the flowers fallen in the pond looked interesting.

Also strolled down to the old Grafton Bridge which is always worth a look it was built in 1932 with a roadway built on top of the railway. Until I actually stopped in Grafton I thought it was the daftest bridge ever built, being very narrow, with steep and badly angled approaches at each end. I never realised there was a railway underneath because you cannot see the line from the road. It also has a pedestrian way each side on the railway level and the road supports have been decorated with modern art.

The new bridge now runs parallel but the old bridge remains in use for road traffic.

After returning to the motel for a very late lunch went for a walk to see all the Op Shops, have a coffee, ice cream and buy more milk in the shopping town.

All in all it was a busy but entertaining day. 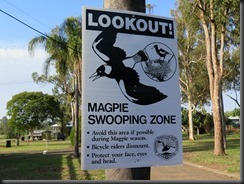 Drove the circuit of Jacaranda lined streets and they were very impressive. Finally parked next to Market Square which seems to be one of the festival centres. It too is filled with Jacaranda trees. 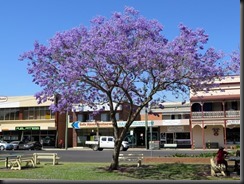 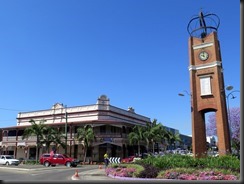 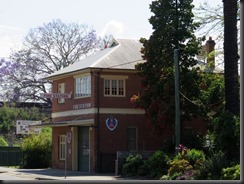 We were just thinking of leaving when a couple of kids started playing guitar and singing on the open air stage in the park. I think it was pupils from Grafton High School performing (unless I misheard). Some of them were very good but all of them performed very well. It was a pity they only performed in front of a small audience comprising their school mates and half a dozen of us old folks. They deserved better. I have to be honest and say I only recognised one piece they sang (a Missy Higgins composition) but I presume they were all contemporary songs.

They were followed by a primary school who started off with a school orchestra. Obviously the days of the screeching recorder are over; these kids had flutes, trombones, saxophones, clarinets, drums etc. The orchestra was followed by a Year 2 choir and dancers then Stage Two (?) choir. While this school performed there was a big audience of doting parents and grandparents.

After all this free entertainment went shopping in the local shopping mall to buy important ingredients like milk, tomatoes and nuts (forgot bread)  before returning mid afternoon to the caravan park for a late lunch and recovery time. Then planned tomorrow’s excursions which will involve more driving and less walking.

Spent a little time trying to improve the TV reception in the camper but the local transmitters are over 35km away and seemingly too weak for my aerial. The TV knows the signal is there but can’t make head nor tail of it.

Disaster! The power supply for the HDD seems to have failed. No TV and far worse – no films or TV series for late evening. To be fair I did know that this power supply was dodgy but I thought it was just a connection glitch, I hope it hasn’t taken the drive with it.