Up before 6am presumably because, being on the edge of a time zone, the sun rises unreasonably early. Anyway I showered, washed yesterday’s clothes, had brekkie etc while most people were still asleep. 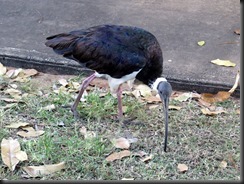 At a far more reasonable hour drove into town to the Visitor’s Centre where a helpful lady booked me on a flight to the Bungle Bungles with a walking tour of Cathedral Gorge. Pretty pleased with that, there is also a chance of a helicopter ride when I get there (hoping and clutching my credit card). Actually I thought it was another seaplane ride but reading the brochure it is a normal plane and we land on a dirt airstrip in the National Park.

As I will be away all day tomorrow filled the car up with fuel too.

The main event today was a cruise on Lake Argyle; the bus picked me up at 1pm and drove half a dozen of us to the lake. On the way it stopped for 15 minutes at the Argyle Downs homestead. This was the original house built by the Durack family when they first started grazing in the region in the mid 1800s. It was dismantled when the property was to be flooded by the dam and rebuilt on higher ground.

The cruise itself was so so. Everybody else seemed to enjoy it but personally I thought it was a bit dull, no dolphins just a few freshwater crocs, some short eared wallabies, the odd wallaroo and lots of water. The dam wall itself is made of locally quarried rocks and clay there is no concrete except in the pump towers. 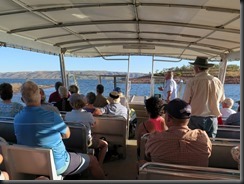 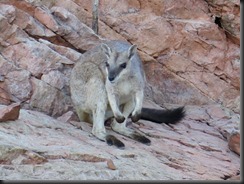 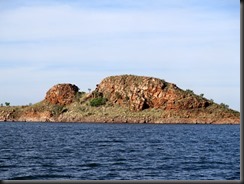 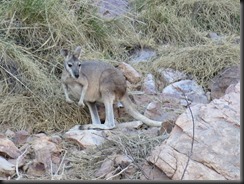 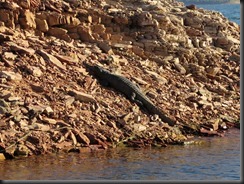 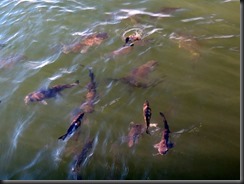 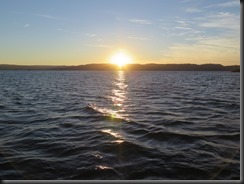 Just before sunset some of the passengers went swimming in the lake, the water temperature is 26’C.

There was one redeeming feature – two cans of free beer. Yes, I know it is me but cruises and water don’t excite me much.

It has been six weeks since I started on this trip so time for some statistics (you know… those things made up on the spur of the moment) rounded to the nearest whole number.