It was cool last night I woke up at one stage and thought my thermometer was reading 0’C (in fact it was 8’C). After my shower I got a load of washing done – That might last me until I get home.

There was no wind early on but that changed during the day. Drove to Mildura to do some shopping and visit the Tourist Information Office, the latter was in a terrific council facility which housed the library, cafe, tourist bureau and an aquatic centre. 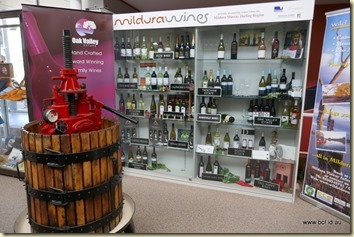 Drove across the Murray river into NSW to visit a Holden Museum, it was probably smaller than the Motorlife Museum at Kembla Grange but the cars gleamed and they were Holdens. Not every model was represented, for example they didn’t have an HK or HJ Kingswood but they had an FB – those are the Holdens I have owned – but I did enjoy the museum and it was only $10 entry. Stayed for a coffee afterwards. 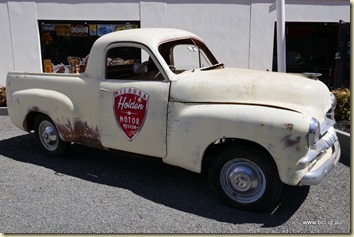 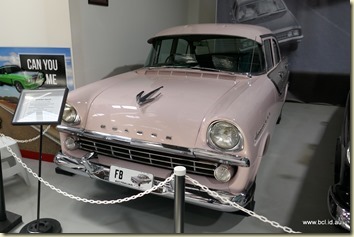 Returned to the caravan park for a late lunch then went off to re explore the sights of Red Cliffs – found the lookout which looked out on virtually nothing unless you ignored the, ‘Unstable Cliffs” sign and climbed the fence. also found a dirt track which led to the cliff edge but the views from that were disappointing too.

Near the  Red Cliffs shopping centre found and walked along the Peace Walk which was not particularly exciting but it did have some interesting information about the town. The area was originally settled after WWI when the land was cleared to provide soldier/settler blocks for returned servicemen and the town only really got going by 1925 when the post office was built.

Returned again to the caravan park about 3.30pm to find the wind gusting and brown dust clouds on the horizon. The dust arrived shortly after 4pm – not a thick dust storm, just enough to cover everything with a thin layer of red soil.