I had seriously thought about returning south via the coast ie Innisfail to Townsville but the combination of possible rain and the coastal traffic on a public holiday made me rethink the idea.

At the moment I am several days ahead of my schedule because I had allowed two stops between Charters Towers and Atherton in each direction. On previous journeys I have stopped at Undara Lava Tubes but on this occasion, while I did take a break at Mt Garnet on the way north and Greenvale on the way south, neither places have any great interest or reason to stop overnight.

Today’s trip was a long drive but I was listening to an audio book “The Handmaids Tale” which passed the time pleasantly enough and I always enjoy the bush winding passed.

Ravenshoe and its wind farm was its usual windy, soggy self: 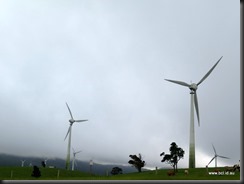 …but the weather improved no end past Mt Garnet.

There are probably less than 10km of single lane road now on the whole of the Great Inland Way. 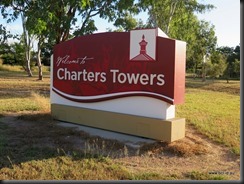 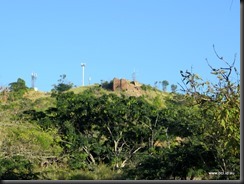 Today was to be a long drive. There are really no stops until Mt Garnet unless you go to the Undara Lava Tubes but I have visited them twice in the last 5 years, including last year  so that was not practical. ,There are virtually no rest areas on this road either – the only place.s are left over sites from past roadbuilding/repair.

The drive from Charters Towers was fairly uneventful except for occasional encounters with the local wild life.

When I first visited the Undara Lava Tubes over five years ago the road north of Charters Towers was mostly single lane.

Now there are only a few km of single lane road left.

The weather was beautiful until I reached Mt Garnet where I stopped for fuel – ironically the cheapest since leaving home – from then on it was getting noticeably cloudier as I drove.

By the time I arrived at Ravenshoe it was pouring with rain, I stopped and had a look at the forecast; not good! This is almost exactly what happened when I drove from Undara to Cairns five years ago – the weather was appalling all the way to Atherton where it continued raining.

BTW I think Ravenshoe is the highest town in Queensland.

Decided to push on to Mareeba where the forecast was not so bad. Arrived at the Tropical (?) Tableland Caravan Park at 3pm. It had been a long drive and the skies where still threatening.

In the event it did rain for a while when I was getting fuel but as sunset approached small patches of blue sky appeared – I hope this is an omen for tomorrow and my drive to Cooktown.