Went into Broome first thing to check out the Visitor Information Centre – arrived just after 8 am but it didn’t open until 8.30. As luck(?) would have it I had run out of breakfast cereal yesterday so while I waited I visited the McDonalds’ opposite for breakfast. First Macca’s I have had since gawd knows when, they haven’t improved in my absence but I had my free seniors coffee with a bacon and egg McMuffin.

Returning to the Visitor’s Centre I asked about visiting the Horizontal Falls something I have wanted to do since I heard about it on  Senior’s Holiday a few years ago. I knew it was expensive but what I hadn’t counted on was a cruise ship visiting Broome! The only chance was Friday so I booked – they pick me up at 5.15am

Went for a look around Chinatown and was surprised at the number of people there considering how empty the caravan park is but of course it was the cruise liner passengers but just in case I rushed back to the caravan park to make sure I had a site until Saturday morning, all was well, the park still only has less than a dozen visitors. 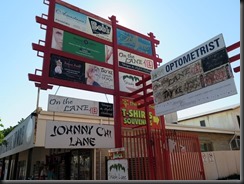 Returned to the town centre to look at Cable Beach and the port where a P&O Cruise liner was berthed. 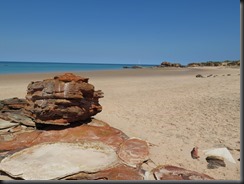 There can’t be a slipway in Broome because people were launching their tinnies from the beach.

It was late lunchtime by now and I found myself at the Wharf Restaurant which is supposedly famous for its seafood. I decided to try a medium grilled barramundi. It was OK but frankly no better than one I have had at Dapto Leagues Club and it was probably only half the size. However it was pleasant enough eating while looking over Town Beach and watching the coaches ferrying the cruise passengers back and forth. 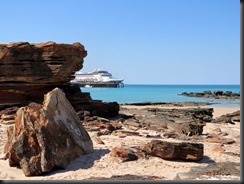 Did a bit of shopping to replenish supplies especially breakfast cereal and bought a $5 towel from Target. I wouldn’t have thought it but a spare towel is actually a good idea.

Late afternoon returned to caravan park where I had a swim in the pool and a shower. Good relaxing day, ended up watching the local wildlife eating the park’s new grass.