After 20 minutes driving from Kununurra crossed into the NT and lost 1.5 hours of my life. 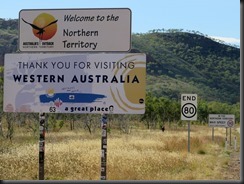 Note the sign telling you that the maximum speed limit in the Northern Territory is 110kph – about 200 metres down the road was a 130kph speed limit sign (someone must have forgotten to remove the first sign when the NT went back to its old limits).

Driving was easy on a fairly good road through undulating bush.  I made a few stops at things that interested me. 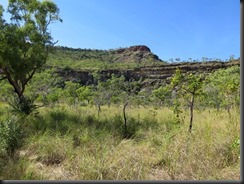 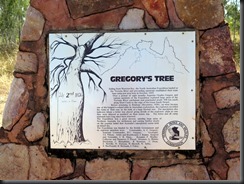 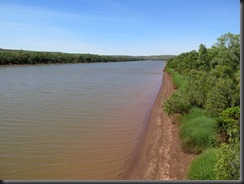 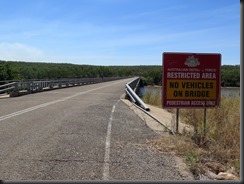 Was undecided whether to stop at Timber Creek or push on another 90km to Victoria River. I stopped for a few sights along the way and it was after 1pm by the time I arrived at Timber Creek so I booked a night.

While I waited to book in I enjoyed a bloke going rabid about paying $1.70 for a two day old copy of the NT News (paper) the girl behind the counter was trying to explain that this was a remote location and the newspapers were always a couple of days old. He only wanted to pay $1.40 for it – how he arrived at that figure I don’t know but he was very insistent. He eventually flounced out but rather spoilt the flounce by having to come back to get his money back.

Unhooked my trailer in a nice shady spot and went to see the local sights having seen a couple of signs indicating lookouts as I drove in. 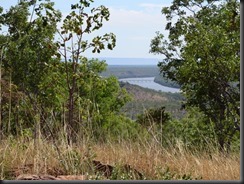 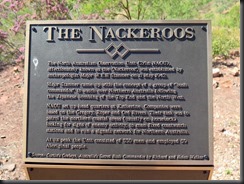 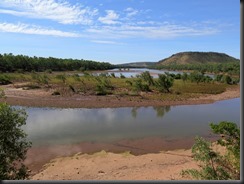 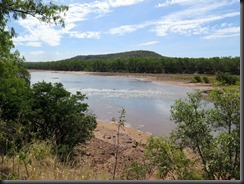 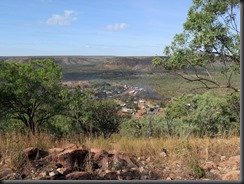 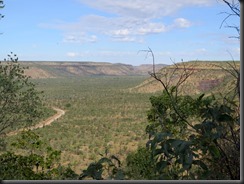 The road in the last picture is the highway from Timber Creek to Katherine (only 290km away).

In the creek and bush at the bottom of the caravan park were some freshwater crocs, turtles, kites and bats. Actually there was a two metre croc (as big as the males get) on the bank when I first walked down but I thought it was a fibreglass garden ornament and walked within a metre of it,  it didn’t move. It was only later when I went back and found it gone that I realised it was the real thing. 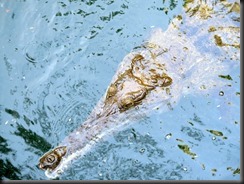 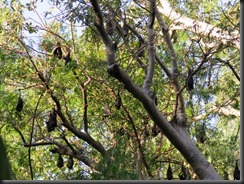 Power for this town is generated locally at a small diesel power station.

I could do without the power I suppose except I like a cup of tea and some toast, videos and my music (am listening to Captain Beefheart as I type).