Fog! Woke up to a thick fog, visibility was down to less than 50m however by the time I was ready to leave at 8am you could see the end of an adjacent paddock. For the first 30km of the drive it was still pretty thick fog. 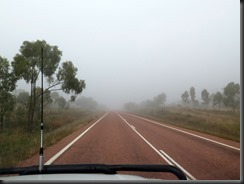 Almost suddenly I was driving in sunshine, the clouds disappeared rapidly and it was horizon to horizon blue skies which remained for the rest of the journey. 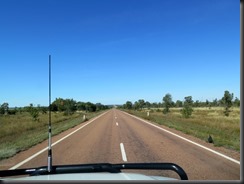 On the way south I passed hundreds of caravans and trailers going north, “hundreds” is not an exaggeration I counted 30 in one 12 minute period. I can understand now why someone said that on 1st July the parks put their fees up to $50 a night with all that traffic.

Nearing Clermont I passed the Clermont Coal Mine with its conveyer belt running for km beside the road and its enormous spoil heap stretching along the other side of the road.

I had intended to stop at Clermont tonight but because there were few opportunities to stop on the road it was still reasonably early when I arrived so I only stopped to fill up with fuel before driving on to Capella another 60km further south.

Capella is a small town of less than 1000 people but it has a caravan park. It is Sunday and the town is dead except for the pub which was surrounded by utes and as noisy as anything. I bought a 6 pack of beer and had a quick schooner there. 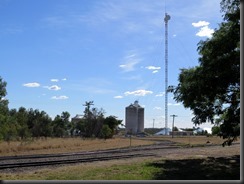