Despite an almost empty park we crammed ourselves right up against a vacant cabin to take advantage of the shade it offered during the hottest part of the day. The advantage was that in the morning the sun warmed the camp up.

After having a shower, breakfast, coffee and all the basic necessities of life it was time for a visit to the Grampians. It is a Saturday so expected more visitor traffic than there actually turned out to be.

There was a sharp contrast between the plains and the mountains, no gradual rise, one minute you were driving along flat roads, the next climbing on narrow winding  mountain roads.

The scenery was pretty spectacular.

While the route and lookouts were uncrowded Halls Gap (just visible in the last photo), the town in the centre of the area, was packed with cars and people. I had intended to stop there for a meal but parking seemed at a premium and it was pretty crowded so we moved on.

On the way back to Horsham there was a ‘Giant Koala’’ at Dadswells Bridge. For a ‘Big’ thing the Koala wasn’t bad but the cafe and gift shop had a slghtly run down feel about it but there is nothing quite like an over priced cup of tea and a ham sandwich in such surroundings. 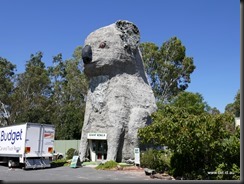 By mid afternoon the temperature had risen to 40’C but there was a slight breeze which made it slightly more bearable than yesterday however it seemed like a good opportunity to get the laundry done.

After a quick visit to Coles in Horsham for essential supplies the washing was done, on the line and dried within an hour.

Despite the heatwave it was a good day out