A cold Ballarat morning, no rushing to get away only 230(ish)Km to travel today. Staying at San Remo on the mainland rather than Phillip Island itself where the camping fees are ridiculous.

From Ballarat it was expressway right into Melbourne however that might have been a mistake because as we neared Melbourne the traffic got heavier and slowed to a crawl until past the West Gate Bridge. Might try to detour round Melbourne when we head north rather than use the expressways.

Despite these holdups arrived at San Remo just after midday and settled in on a very nice grassy site in an almost empty park.

Because it was so early and a lovely sunny day investigated going to Penguin Parade today rather than waiting until tomorrow and booked a general viewing ticket on line. The penguins don’t return to land until after sunset so there was plenty of time for other things.

Washed a couple of T shirts and undies to give me enough clean clothes to get back home without further washing before setting off for Phillip Island. The bridge to the island is a few hundred metres from the caravan park but you forget how big the island actually is, after about a 20 minute drive found where Penguin Parade is located then drove on to The Nobbies. Spectacular scenery as usual even saw a whale in the distance which surprised me as I thought they would all be much further north by now. 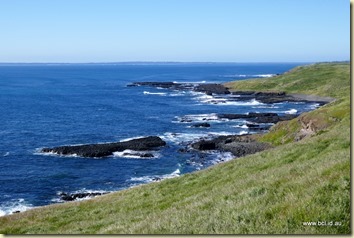 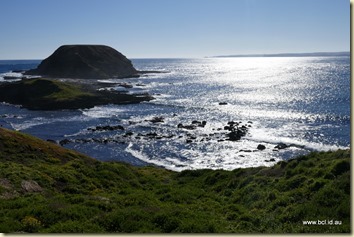 After spending quite some time there drove to Cowes for dinner. Decided on a Thai restaurant near the pier, it turned out to be an excellent Thai meal. By the time our meal was over it was just after 7pm and time to make our way back to see the penguins. 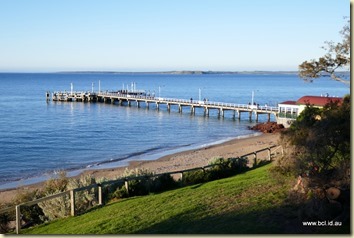 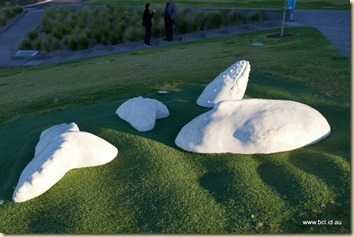 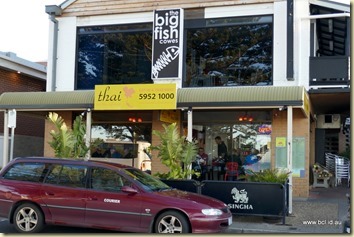 Managed to get a girl at the ticket counter to print out the bar codes of the tickets from the receipt emails because I was not sure that I would be able to find them for scanning at the turnstiles.

The Penguin Parade building was massive with food, souvenirs, information, rest areas, the lot – just before sunset made our way out to the viewing platforms. A fellow gave a talk about the penguins which was repeated in Chinese (I would guess that 90% of the visitors were Chinese tourists). I learned that of all the 18 species of penguins the Australian Fairy Penguins are the only ones that spend all day at sea and only come ashore en masse after sunset. It keeps them safe(r) from predators like raptors (Fairy Penguins are only about 33cm tall – ie snack sized), apparently the other 17 species come and go between the land and the sea as they please.

It was cold and got colder. At about 8.15pm the first penguins appeared at the waters edge and thereafter more and more came ashore. They all gathered at the waters edge before rushing across the sand to the undergrowth. To be honest at first I couldn’t see them at all but eventually made them out – should have taken my binoculars. Watched them arriving for half an hour or so before the cold decided that we would leave. Walking back along the boardwalks we saw dozens of them making their way back to their burrows.

Visitors are not allowed to take photographs but they let you download theirs, here are a couple.

Personally I thought the penguin tours in Tasmania were better, far less crowded – ten people instead of hundreds, you seemed much closer to the birds and you could take photos (without flash).  I am glad I went but it is added to my “Do Not Bother Going Again” list which includes – Scenic World, Great Ocean Road, The Stockman Hall of Fame, Waltzing Matilda Museum and now Penguin Parade.

Arrived back at the caravan park at nearly 10pm, overall another good day out.