After leaving Denham called in at Shell Beach again (I forgot to take any photos last time) and this time walked much further along the beach. It really is a remarkable beach.

It literally is just a mass of small shells – millions of them stretching for kms. 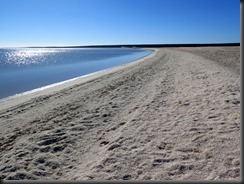 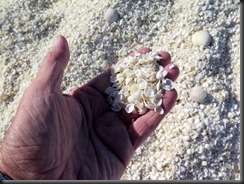 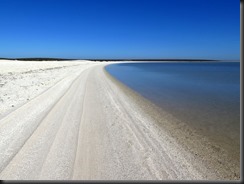 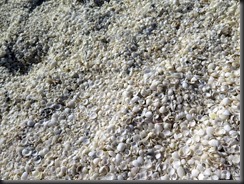 The sea is exceptionally salty, I put my hand in and once it had dried it was covered in a thin layer of crusty salt.

Walking back to the car I saw what I thought was a straight shadow across he road; except that there was nothing to cast a shadow. 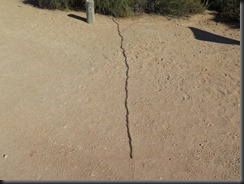 On closer inspection it was a happy band of caterpillars crossing the road holding hands. 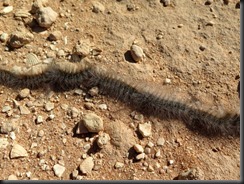 I arrived in Carnarvon at just after 1pm, booked in to the caravan park and went looking for a tyre place for a wheel alignment. Quickly found a Tyrepower shop and was lucky enough to book the car in immediately. While it was being worked on I had a wander about what looked like the centre of town. 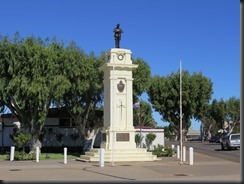 Found a tourist information bureau and obtained a map and a brochure on local attractions. I also had the most unusual meal at a local cafe – egg and bacon on a waffle with maple syrup! I had to try it… actually it wasn’t that bad but I think I will stick to egg, bacon, toast and BBQ sauce in future.

Back at camp noticed the old OTC dish was lit up right behind my  ‘campsite’. It is due a visit tomorrow – they claim to have been an important part of the Apollo moon landing, I can’t wait to find out why.

(You do know that if you click on these photos you get the full size version – click on your browsers ‘back’ button to return.)

Looks like another night without the news. The problem with digital TV is that it either works or it doesn’t, there is no snowy but watchable picture when the signal is weak just a mass of blocky pixels with an incomprehensible sound track. Oh well, I can always watch a movie.

It is three weeks since I set off so here are some facts:

Today is a straight drive to Denham with the intention to visit Monkey Mia and see the feeding of the dolphins.

On the way stopped for fuel having decided that fuel was probably cheaper at a roadhouse on the main (only) highway than some small town off the main road. This is as yet an untested theory.

On the way turned off to Hamelin Pool to see the Telegraph Station and the local microbialites and stromatolites – it’s all to do with microscopic life that form communities; thousands of species of bacteria and microbes that make up every few millimetres of these microbial mats. Anyway this is what they look like: 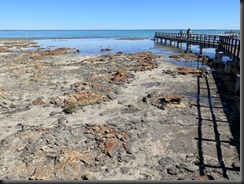 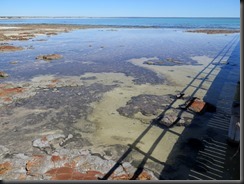 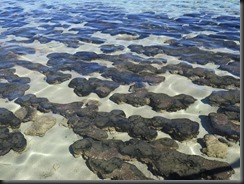 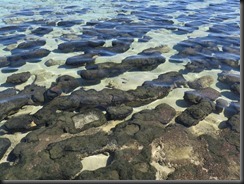 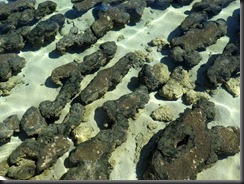 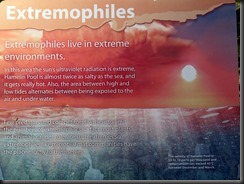 I booked into Denham for 2 nights but I might have to extend that because I noticed a problem with my car which I want to get fixed before anything else. 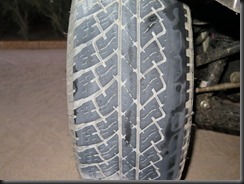 The right front tyre has scrubbed out badly.

…and it’s goodnight from me.