The night was windy and miserable; the vent on the camper roof kept banging and waking me up. It rained intermittently so I couldn’t leave the glass panels open. Was warm enough but it was not a good night.

Up early to get the laundry washed, dried and packed before 9am. Pretty pleased ($3 for washing machine, $3 for dryer).

After some breakfast I drove into town to see the sights. First stop Makybe Diva, it’s a horse that won the Melbourne Cup and it definitely looked like a horse to me. 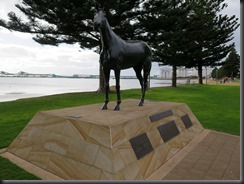 Nearby was the Mosaic Couch another attraction of the town. 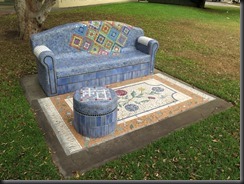 Not mentioned in the brochure was a statue of Flinders and his Cat. 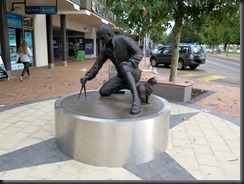 Back in the car to visit the Old Mill which you can climb for spectacular views of the town, 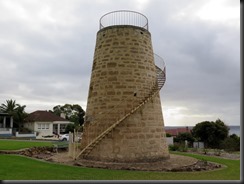 The Axel Steinross Maritime Museum was next, it was closed but there was an interesting variable pitch propeller and a couple of boats outside. 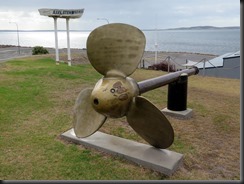 Onward and upward to Winterhill Lookout for more views. 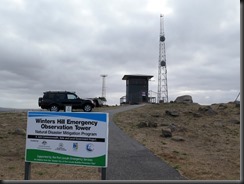 A 40km drive to Coffin Bay, alas not some macabre beauty spot but a small fishing port named after an Isaac Coffin. 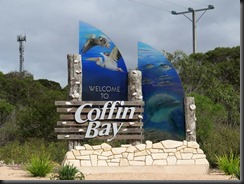 All the time it was bitterly cold. At Coffin Bay I bought coffee and a sausage roll which went down well.

Back to Lincoln National Park to see a monument to Flinders. The bastards wanted $9 to go in so I gave it a miss – I had already seen Flinders and his Cat which was probably enough Flinders for one day. But when too much Flinders is never enough there is always a cairn to mark where he found some water for his ships. 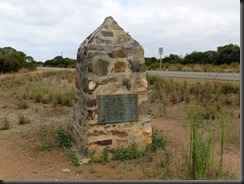 Went to a couple of other interesting spots at the Marina and Billy Lights Wharf but by then felt I had exhausted Port Lincoln’s attractions so returned to the caravan park to watch the goings on there. Believe it or not the sun came out for a few moments. 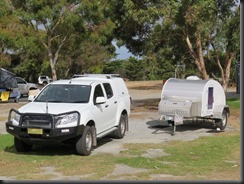 While it was a good day out, the weather doesn’t suit me at all, far too cold.

On reflection perhaps I should have made this two trips the southern part in summer the northern part a little later in May. Having said that tomorrow’s forecast for Ceduna where I am heading next is better and it has only been two wet, cold and or windy days. I just hate cold weather so much.