Shock… Horror… I was awoken this morning by what sounded like raindrops on the roof… except instead of a continuous pitter patter it was about 4 or 5 drops then perhaps 30 seconds pause then 4 or 5 more drops! when I finally got up sure enough the ground was damp but the surprise was that it was foggy! Thank goodness this didn’t happen yesterday. 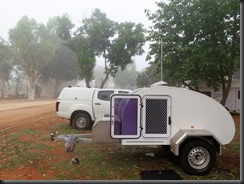 Performed my usual ablutions and set about dismantling my camp, making breakfast and topping up the Esky with ice (I am multi-tasking).

By 8.30am I was ready to leave but I had still not decided where I was going; was it Derby or Fitzroy Crossing? A quick look at the map – Derby was only 40km from the highway – so it would be a visit to Derby first; if it looked OK then I would stay, if not I would carry on toward Kununurra.

Derby looked OK, the caravan park had vacancies so I checked in until Monday, set up camp and took off for the local visitors’ centre. Just outside town I had noticed a sign for the Boab Prison Tree so asked about that and the lady also gave me a self guided walking tour brochure. Unfortunately the local National Parks are not yet open so the day bus tour I was hoping for was not available (the problem of travelling early in the season – remember Kakadu last year? a lot of the crossings and parks were not open there either).

Anyway after the visitors’ centre I drove down to the wharf area for a look. The tide was on its way in so was flowing very fast under the wharf. The wharf was not a hive of activity except for a fishing boat being refuelled and the odd fisherman along the pier (not entirely sure that fishing can be classed as an activity). 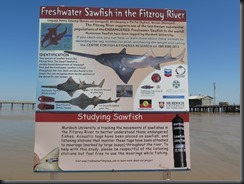 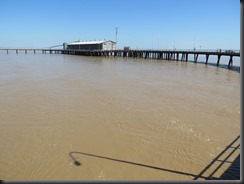 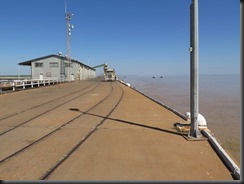 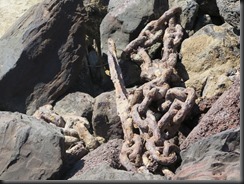 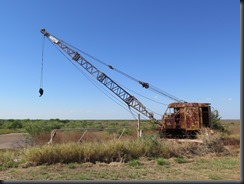 At the entrance to the wharf was a restaurant/takeaway called “The Wharf” which reminded me that I was hungry. Went in to look at the menu and discovered they had a selection of Indian dishes. I selected one called Prawn and Scallop Curry, I was tempted by Rogan Josh or even Vindaloo but this won the day. It was excellent – fairly spicy (but could have been more) and plenty for a lunch.

I took a photo of the Mangroves just before I went for lunch and when I had finished took another from just about the same place. Gives you some idea of how quickly the water rises when the tide comes in. Actually it was going out again by the time the second picture was taken. 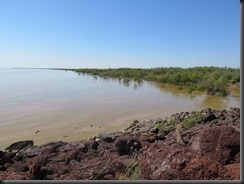 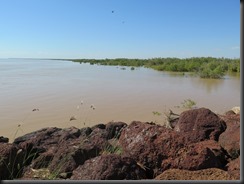 After eating decided that there was plenty of time for a visit to the Boab Prison Tree. 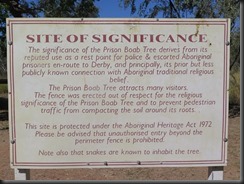 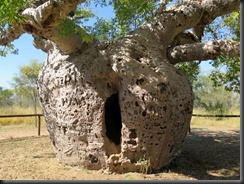 At the same location was a couple of other historic objects.There was Myall’s Bore and Cattle Trough. The trough is 120 metres long, was built in 1917 and could handle 500 cattle at one time. Unfortunately the bore pressure failed so now the water has to be pumped to the surface with a windmill. 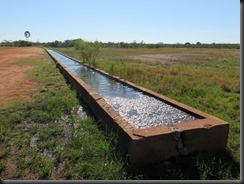 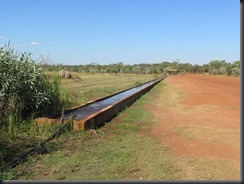 Finally there was Frosty’s Pool built in 1944 for troops stationed in the area during WWII. It was constructed by the 3rd General Transport Co and nicknamed after a platoon member. BTW I hesitate to call this ‘historical’ as it was built only three years before I was born. 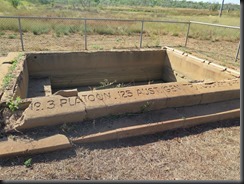 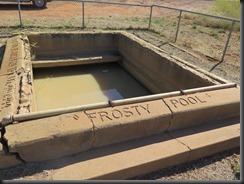