I was booked on the 8am trip to the lava tubes and was ready in plenty of time after shower, breakfast, laundry etc. to meet the guide outside the lodge reception.

There was a big crowd but it turned out they had two parties so in fact when we left my bus was not even full. As we neared the tubes you could see the Savannah grassland which stretches across northern Queensland interspersed with patches of remnant rainforest.

Plus examples of the Queensland Bottle Tree (not to be confused with the Boab). 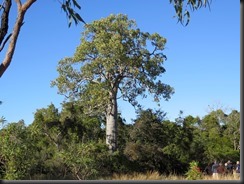 The rainforest was clinging on in the cooler spots where the lava tube roofs had collapsed providing shelter and moisture.

The lava tubes are the result of a ‘shield’ volcano which oozed lava over the landscape 190million years ago to form the lave tubes. The tubes only exist about 30km from the Undara Volcano because only there were conditions right. The lava field stretches for something like 140km from the volcano and is the largest of its type in the world though the lava tubes are not unique they are some of the biggest. (That’s how I remember the guide’s tale anyway). 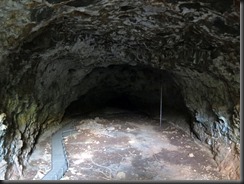 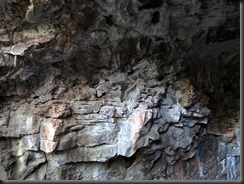 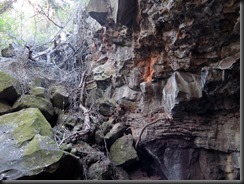 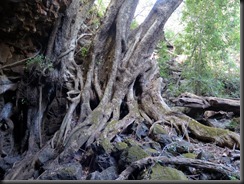 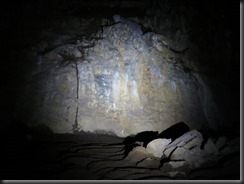 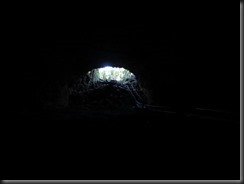 The roof is a mass of colour from the many minerals in the rock, brown – iron, white – calcium, dark brown – basalt. There were others but I forget them. 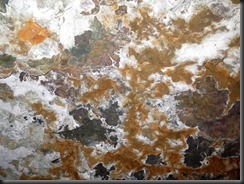 The local aborigines have no stories about the lava tubes and there are no rock paintings in any of them. The theory is that because the last eruption of a volcano in the area was less than 20000 years ago aboriginal history regards them as something bad and to be feared so they kept away from them.

They are truly spectacular only exposed because millions of years ago the roof collapsed in places where it was too thin to support its own weight. 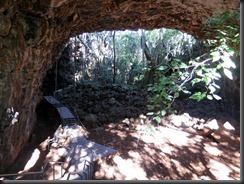 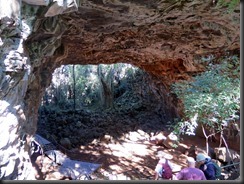 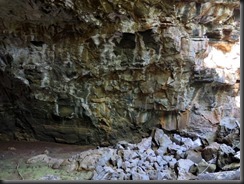 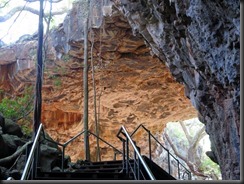 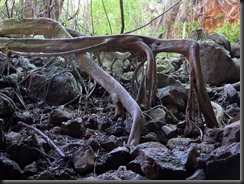 Because of the early start I was back at my caravan by about 11am when I was able to upload yesterday’s blog. I tried last night but the internet wasn’t working even at its best Telstra only has one or two bars signal strength even though I can see the tower. There is no Optus signal at all.

Decided to go on another of the signposted walks; a 4km one called the Pioneer Walk which followed the route of the early telegraph line to an old slab hut. I think with my two visits I have now done all the walks except the very long all day ones (well, 6hr). 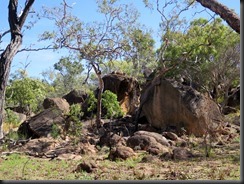 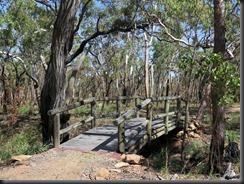 See the original Telegraph Pole? Made of Cypress Pine which termites don’t like and is resistant to bush fires. It has been there since the 1890s. 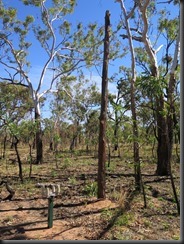 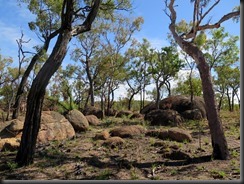 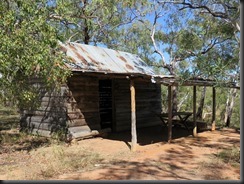 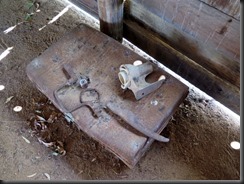 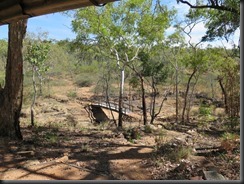 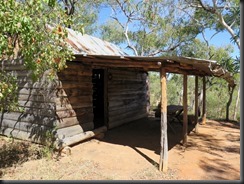 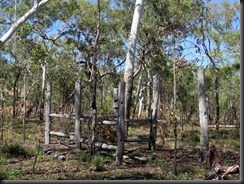 When I returned I was buggered, even worse my feet hurt! To ease the pain I ordered an Undara Burger and a beer at the bistro for lunch; both of which went down very well. 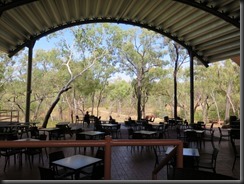 The Kookaburras wait for someone to leave their food unattended. 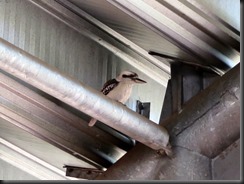 However I think that is enough food for the day and also the end of my outings – an afternoon of rest!

Actually the afternoon proved to be quite busy with people arriving and setting up near me – not busy for me obviously, I just watched. Last night there was just me and a mobile home in this set of seven sites, today I have people either side of me and the place is filling up.