I hadn’t intended to leave Young before 10am (chucking out time) but after breakfast started to pack things away and it literally took me 15 minutes so  set off ridiculously early at 8.30am.

Virtually no traffic on the roads, mostly minor roads cutting across country. First stop was West Wyalong where I had coffee. Was able to park in the main street taking up two spaces. I wonder what happened to make West Wyalong bigger than Wyalong? Wyalong you would blink and miss. (Answer – it was probably gold!) 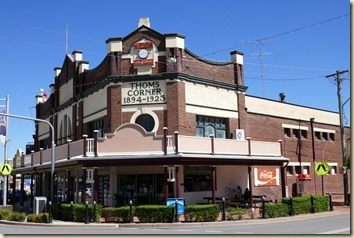 Continued on after filling up with a flat white and carrot cake.

An otherwise non descript small town of Ungarie provided the next surprise. The town sign said “Ungarie – Home of Australia’s Biggest Football” and sure enough on a street of mostly empty and/or derelict shops was an AFL footie on a pole. (That description of the town is probably unfair it is no worse than many small towns I pass through) 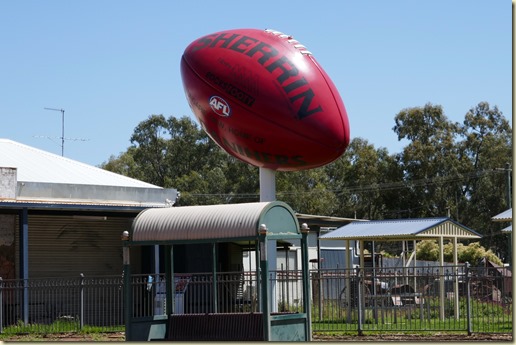 Arrived at Lake Cargelligo just after midday and checked in. The spaces were large but not much shade – I squashed up into some shade but needn’t he bothered because by md afternoon it had all moved to the next site.

After setting up drove to the town centre to do some shopping and have a brief look round. 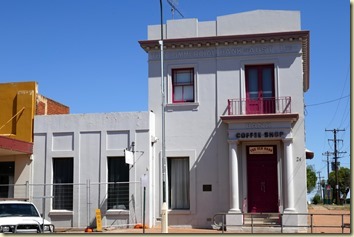 I suppose November is the end of the “season” for tourism as it is starting to get warm (42’ is forecast for the weekend) but it is quite a nice spot for those interested in boating, fishing and bird watching. I must admit that my only reason for visiting was that I have never been here before. The lady in charge of the park pointed out all the attractions the town has to offer and marked them on a map so I will look at them tomorrow.

Just for a change I set up the awning I had made for my car rather than the gazebo. Embarrassingly it took longer to set up than the gazebo but that was entirely due to my inexperience ie I kept having to retrieve forgotten pegs, hammer  etc which virtually set me back to the start. In the end it turned out very well. The only problem with it is that the car is stuck in one position while it is up.

By evening the campground was not even half full.